There is a solar battery revolution happening in Melbourne homes. And, since connecting a Tesla Powerwall 2 to their two-year-old solar panels a month ago, Andrew has become the power policeman in his family home.

Checking a phone app, he knows at any time how much power is being used in the house and on which appliance.

Will there be a day when solar plus batteries will start wiping fossil fuels off the grid?

That is bad news for his teenage kids, who know they’ll get dad ringing to ask: “Why are you using the overhead heat lamps when there is ducted heating in the bathroom? Close the door, heat up the bathroom and turn off the lights.”

The point of it all is to save money

“With two teenage children, the power bills were heading the wrong way. My wife is a primary school teacher and [when] off on school holidays the bill was growing then too,” he says.

There are many others coming to a similar conclusion. Research released this week shows more than 7000 home battery systems were installed across Australia in the first half of 2017 – exceeding the total 6500 sales for the whole of 2016.

The SunWiz 2017 Mid-Year Battery Report, based off discussions with manufacturers and data available through regulators, predicts the market will have trebled by the end of 2017, with more than 20,000 battery installations by year’s end.

SunWiz founder Warwick Johnston, 38, says the driver for this increase in battery sales is the rising price of electricity “spurring people into action to adopt solar and adding a storage unit as well”.

Johnston says connecting batteries to solar systems is giving the power back to people to use when they want and feed back to the grid what they don’t need.

The power bill is growing!

“With two teenage children, the power bills were heading the wrong way. My wife is a primary school teacher and [when] off on school holidays the bill was growing then too,” Andrew says. Photo: Joe Armao 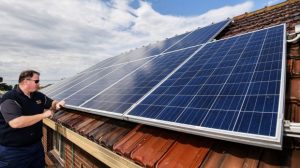 “With two teenage children, the power bills were heading the wrong way. My wife is a primary school teacher and [when] off on school holidays the bill was growing then too,” Andrew says. Photo: Joe Armao

Peter Elliot, 47, managing director of solar retailer and installer SUNstainable, says the average installation of solar panels and battery is $17,000 with a payback period of about seven years. The Tesla Powerwall 2 accounts for $11,000 of the price.

“There is a greater awareness of what the batteries can do. The community is more educated and they are hurting because of increased power bills,” says Elliott.

The community is more educated and they are hurting because of increased power bills. Solar retailer Peter Elliot

When the sun is at its peak during the day, solar energy is generated, charging the battery, which then stores the energy for use any time.

After work when the TV goes on, the cooking starts and the heating is at full blast, electricity retailers charge peak rates. This is when the switch to the power in the battery kicks in, with savings to the household by way of free electricity.

SUNstainable, with a turnover of $3 million, has experienced an increase in business because the cost of the batteries has come down. Powerwall 2 has twice the capacity of the first version for the same price.

“There are high levels of awareness around Tesla and the brand. At the moment, we have a backlog where people who order today will get theirs in February next year,” Elliott says.

When Fairfax Media interviewed Andrew, his battery was full at 11.30am. The rest of the day the excess was fed back to the grid, getting a credit on the family’s electricity bill.

On Tuesday, 10kw was also fed back to the grid. The two days of feedback will offset the daily connection charge from the electricity retailer. The battery will still more than deliver the family’s power needs for the night.

“We are a green-friendly family now,” Andrew says. 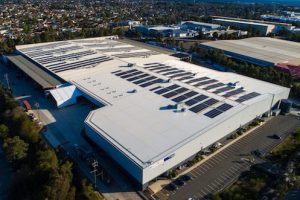 The Victoria energy and pricing regulator has proposed a peak[...] 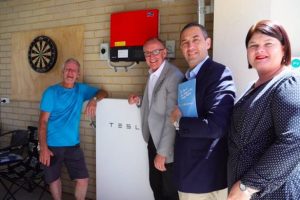