It seems that even big users of energy and the owners of residential mansions are sick of the grid and choosing to cut their links with the main network, and go off-grid.

Installers and energy consultants tell One Step Off The Grid that the numbers of consumers choosing to go off grid is rising quickly, in response to rising cost of grid energy, and the hopeless political environment.

And it’s not just small or energy conscious households making the shift.

Recent data shows that the number of off-grid installations is increasing rapidly, a combination of new homes that don’t bother connecting to the grid, and an increasing number of on-grid homes that have had enough.

The official data, however, may not capture the scale of what is happening now as solar and battery storage options become more attractive.

“Many people are sick of the grid, of the prices and the outages,” says Jerry Robinson, the head of installation company The Green House Effect. “When they do get the chance, even if it is a little bit dearer to go off the grid, they will take it.” 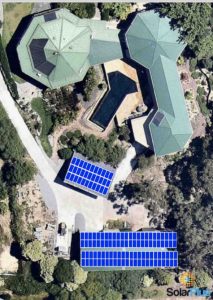 One of the most stunning exits has been this property above, in the heart of the Yarra Velley, just an hour’s drive from Melbourne, that had an average daily consumption of 190kWh before deciding they had had enough.

That consumption is around 10 times the average household, but it seems the owner, a business man who does not want to be identified, was sick of the regular outages; power was lost almost weekly because of some local network fault – and so he decided to look after his own energy needs.

A 46kW rooftop solar system has been installed, by Robinson’s team, on just about every bit of roof space available on sheds and car ports. (This photo above shows the planning, not the actual installation).

There is also 300kWh of lead acid batteries, but no back up generator, so the owner – who has already trimmed his average consumption to 100kWh through various efficiency measures, is determined to ride through.

“This guy has done it because he can,” says Glen Morris, from SolarQuip, who advised on the installation and sizing. (See this story for more on this property, and for photos of the actual installation and graphs of the output).

Morris says there is mixed bag of people leaving the grid –and a mixed bag of reasons. Some do it because of bushfire risk, some for independence, some because they are sick of outages, others to avoid smart meters and others to see money.

This, of course, has implications – not for network owners and retailers, but also for the managers of the grid, and for other consumers.

The huge surge in the uptake of rooftop solar – installations are up 50 per cent from the same period last year – suggests that forecasts that up to half of all demand will be met by distributed energy resources – solar, batteries, and demand management – could be easily met.

The question becomes how many of these stay on the grid. The CSIRO and Energy Networks Association produced a report in 2016 that suggested one third of homes could quit the grid, in anger and frustration, if policies did not address high emissions and high costs.

Little has been done since, and it seems that the exodus is gathering speed, thanks to the increasing availability of battery storage options, and of course the continuing fall in solar prices. Many customers have simply had enough.

Trent Rogers from Northern Rivers Renewable Energy, based in northern NSW, says he has taken 30 customers off grid in this financial year.

“More and more people are getting very irate,” he says. “Some big customers have had enough. Some of them just want to save money.  Some just want independence.

“Everyone is getting sick of it,” he said, and predicts more people going off grid if networks continue to jack up the daily service charge.  In regional NSW, that amounts to $540 a year, just for the connection.

Rogers points not just to rising grid prices, but also new metering rules in regional NSW and the privatisation of meter reading.

For some customers in areas with no mobile phone reception, which means the smart meters can’t be read remotely, they face a charge of $45 per meter reading.

Others have a different reasons for avoiding smart meters. SolarQuip’s Morris says some don’t like the potential privacy intrusion. They are happy to have smart software in their own off-grid system, but not have others able to see what they do and when.

He also points to the demographic change. Baby boomers leaving the city, and pocketing extra money from the sale of Sydney real estate. Many want independence.

Others have no choice. One big bakery in Grafton can’t get enough supply from the grid, while most new buildings are better off installing their onw solar and storage systems rather than paying for a new conection.

“More people will go off the grid. The snowball has left the top of the hill. They can try and stop it, but bits of it (the snowball) will come off and they will keep rolling down the hill.

“It’s the only thing that keep me going. Otherwise I would throw my hands in my air.”

Robinson, from The Green House Effect, says the off-grid ambition is moving from smaller high efficiency houses to “normal” houses, and are including geothermal heat pumps, and underfloor heating.

“I don’t sell payback. I sell conscious and green and that kind of thing. Payback  is not in my vocabulary,” Robinson says. But he notes the off-gridders are either green, or they have been quoted quoted $150,000 to install three poles and a transformer to connect to the grid.

“Ordinary people are doing it. They are sick of the grid, the prices and the outages. When they do get the chance, even if a little bit dearer to go off the grid, they will take it.”

Contact our energy independence experts to start your journey to being bill free.

We are now power load defectors!  So here's the wrap[...]

Mega Solar System How to use inverters to get past[...]