Off-grid, in business: Is this a “new norm” for SMEs?

Off-grid, in business: Is this a “new norm” for SMEs?

Off-grid, in business: Is this a “new norm” for Australian SMEs?

The combination of high electricity prices, falling technology prices and serial political incompetence is pushing more and more Australian businesses to invest in solar and storage.

The Clean Energy Regulator has forecast that the commercial and industrial solar market will increase four-fold this year, and could deliver a large-scale power plant’s worth of generation capacity to the grid in 2018 alone.

But how many businesses are being pushed off the grid entirely? And does it make sense?

According to some of the talks at the Smart Energy Conference in Sydney earlier this month, there is no shortage of Australian small and medium businesses that are seriously contemplating disconnecting. Households already are. But business?

Linked Group Services in Mackay, in north Queensland, is in that category.

But the trades services company, which has a focus on developing renewable solutions for mining, rail and agriculture, has made the leap and is well into the process of going off-grid.

And according to managing director Jason Sharam, the decision to do so was easy.

“One of the main driving forces for us was electricity independence,” he told One Step Off The Grid – and not just from the prices, or problems of network reliability, but from the seemingly endless policy confusion underlying it all.

“The feeling was, if you’re going to keep shifting deck chairs around on the Titanic then we may as well do something about it.

“The grid is slightly unreliable (in Mackay), and we wanted to build our own manufacturing facility, and power it using proven technology.”

For Linked Group – which has around 80-100 employees – finding the right technical solutions to take their headquarters off grid wasn’t too difficult, either. Particularly considering this sort of stuff is their bread and butter. 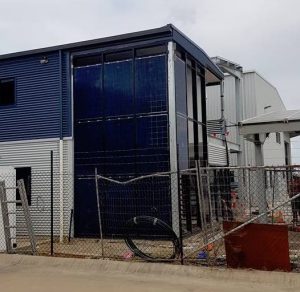 Among other things, the company specialises in mobile solar and battery storage solutions, solar shading structures like its custom built Linked car port, and solar powered portable accommodation, for remote or temporary sites.

For its own Linked Powerhouse, the company has chosen a mix of technologies, as much to ensure a reliable power supply as to show its customers what is possible, and the range of solutions that can be used.

The finished product will have around 100kW of solar – 8kW on a solar car port, another 18kW on a solar patio, 20kW on a storage shed and 45-50kW on the main building, including “glass/glass” modules on windows (pictured above).

There will also be 100kWh of battery storage from Tesla, which Sharam claims is the first off-grid Powerpack to be installed in Australia.

For back-up, there is a Capstone C60 Microturbine, which runs on natural gas (and potentially stn-gas at a later date). And the building site will also use geothermal air-conditioning

The smarts behind the generation and storage capacity are a combination of Fronius and Enphase inverters, and software that will give the team full control of the system, and capture all of its data. 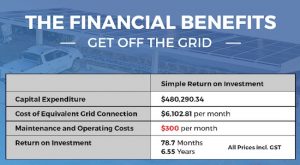 But for all of that cutting edge technology, Sharam says the economics of going off grid has stacked up for Linked Group – as you can see in the table below, taken from his presentation at the Smart Energy Conference in Sydney earlier this month.

“That’s the issue that small to medium customers in this region are facing.

“With the (micro)turbine running, (to go off-grid) is costing us between 40-45c/kWh. So from a financial perspective, why wouldn’t you?”

And that’s the message Sharam and his team are hoping to get through to their customers of, using their own working example.

“One of the major factors (for our decision to go off-grid) is that it’s a major advertising point,” he said.

“So that we could prove to our customers that it was reliable – more reliable and better quality than the grid.

“The way see it is, we’re going to transition to renewables eventually, so let’s look for the opportunity.

“We’ve leveraged our business off that and grown from six employees to 100.

“We want to help companies of our size be able to have their own control, and security. It’s about knowing what your energy expense is going to be. Avoiding that bill shock,” he said.

“We’re trying to prove a point, to a degree, that we don’t need to connect.

“We’ve got a conduit,” he added, “we’re not stupid. But the only reason we would connect was to sell our excess energy to the grid.”

As for other businesses, Sharam is confident there are at least 20 SME’s watching the company’s progress with the Linked Powerhouse, with plans to follow suit.

“This will become the new norm, as the price of storage begins to fall, for SME’s using more than 100MWh a year.

“A lot of it is about getting control back.” 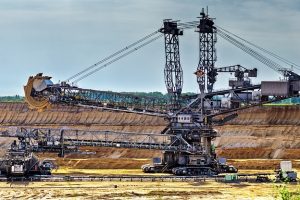 It’s a good thing that home batteries propping up Victoria’s[...] 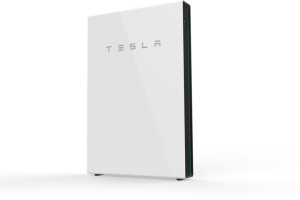