Strengthening the energy efficiency requirements of Australia’s residential building code could reduce household electricity and gas bills by a whopping $18.9 billion between now and 2050, a new report has found.

The Built to Perform report – published by the Australian Sustainable Built Environment Council (ASBEC) and ClimateWorks Australia – confirms energy efficiency as one of the best and cheapest ways for households to cut their energy bills, next to adding rooftop solar.

The analysis shows that by 2030, even conservative improvements in Code energy efficiency requirements could slash energy bills and deliver between 19 and 25 per cent of the savings required to achieve net zero energy in new residential buildings.

Achieving these targets could reduce household bills by up to $900 per year for each household, the report says, while also reducing electricity network investments across Australia by $7 billion between now and 2050.

In fact, the report notes that if a single building was to cut its peak demand by 1kW, equivalent to the power used to run a small oil heater, this would save an estimated $1,000 in required investment in electricity system infrastructure, reducing electricity prices for everyone.

“Even this conservative analysis shows that, by 2030, improvement in Code energy requirements could reduce energy consumption of new buildings by up to 56 per cent,” said ClimateWorks Project Manager Michael Li. 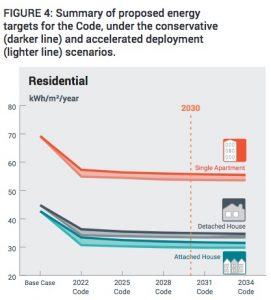 The report follows last week’s release of the 2018 International Energy Efficiency Scorecard, which ranked Australia’s energy efficiency policies and performance as the worst in the developed world.

That report, by the Washington DC-based American Council for an Energy-Efficient Economy (ACEEE), placed Australia at 18th among the world’s 25 largest energy users, a fall from our 16th-place position in 2016.

And it concluded that Australia was not only falling behind its international competitors, but missing a huge opportunity to drive down energy bills while cutting carbon emissions.

And time is wasting. The ClimateWorks/ASBEC report notes that an estimated 1.1 million homes are expected to be built between 2022 and 2025, which – without expensive retrofits – will be using more energy than they should.

Just three years’ delay in the implementation of the energy efficiency targets recommended in the report could lock in $2 billion in residential energy bills and $930 million of additional network investments between now and 2030, not to mention an additional 9 million tonnes of emissions, increasing to 22 million tonnes by 2050.

The added cost to new-build homes of upgrading its energy efficiency, meanwhile, is minimal and more than offset by the benefits – including 15 million tonnes of cumulative emissions reductions to 2030, and 78 million tonnes to 2050.

“These upfront costs would be more than offset by the energy bill savings, reduced spend on heating, cooling and ventilation equipment, and electricity network savings.”

The report also models an accelerated deployment scenario, through which changes to the Code energy efficiency requirements could deliver 22-30 per cent of required energy savings, through deployment of higher performance windows or more efficient air conditioning, lighting and domestic hot water equipment.

The remaining task to reach net zero energy in residential buildings would require a combination of best practice design, on-site renewable energy, voluntary measures to improve energy efficiency, strengthened standards for items outside the Code (such as plug-in appliances) and decarbonised electricity supply. A Solar CBD is a reality. Businesses in Melbourne’s CBD[...] We are now power load defectors!  So here's the wrap[...]